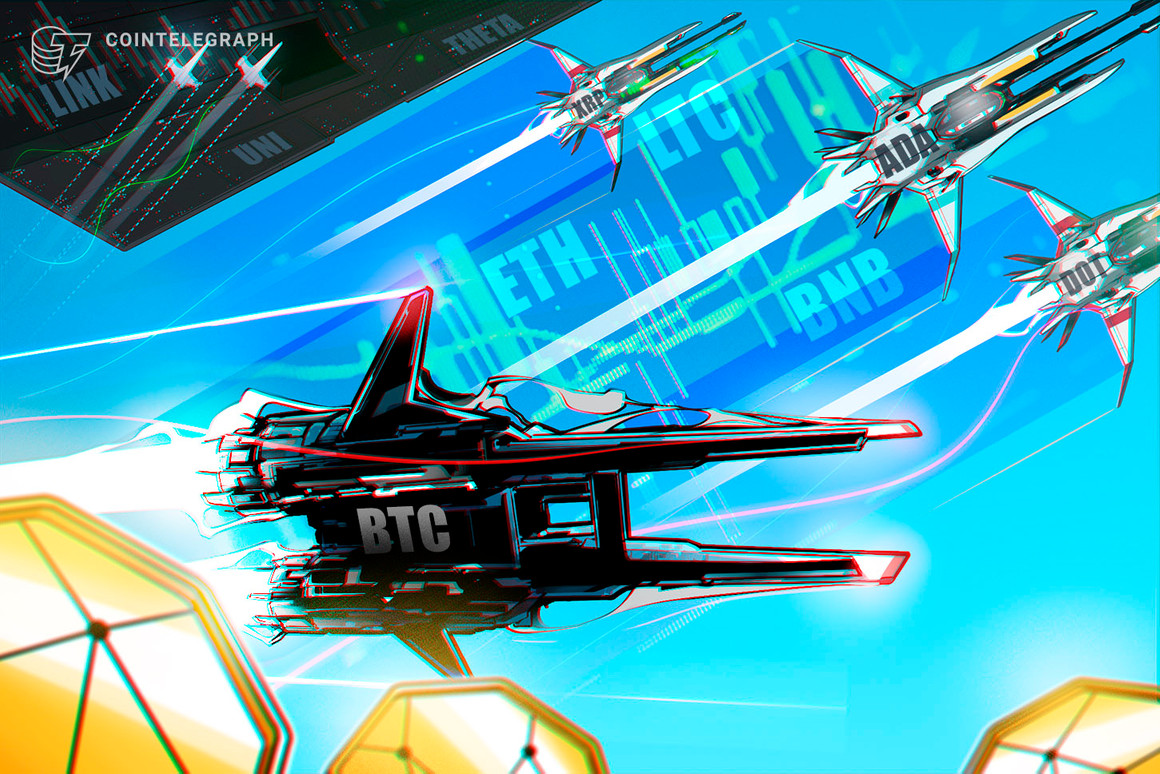 Glassnode data shows Bitcoin (BTC) exchange reserves on Coinbase have dropped by about $8 billion. This indicates that institutional investors are locking away their purchases in cold storage for the long term instead of booking profits.

HODLing by institutions is a huge positive as it will continue to reduce Bitcoin’s available supply, which may boost prices even if demand begins to diminish.

The news flow suggests no slowdown in institutional adoption. New Zealand Wealth Funds Management revealed that its product KiwiSaver Growth Strategy allocated 5% of its assets to Bitcoin in October 2020.

According to the firm’s chief investment officer James Grigor, the first Bitcoin purchase took place when Bitcoin was at $10,000. This means that when Bitcoin hit an all-time high at $61,825.44, the firm was sitting on a 518% profit. Grigor also added that Bitcoin could feature in more KiwiSaver schemes within the next five years.

More investors may arrive if the United States Securities and Exchange Commission approves a Bitcoin exchange-traded fund. The latest to seek approval to launch a Bitcoin ETF is Fidelity Investments. This shows that legacy financial firms are aggressively adding support to Bitcoin.

The arrival of all kinds of investors into the crypto space is a positive sign. While that may be bullish for the long term, let’s analyze the charts of the top-10 cryptocurrencies to determine the short-term trend.

The bulls had pushed Bitcoin above the 20-day exponential moving average ($54,426) on March 24, but they could not sustain the higher levels, as seen from the long wick and the negative close on the daily candlestick.

The BTC/USD pair dipped to the 50-day simple moving average ($51,282) on March 25, which is an important support to watch out for because the bears have not achieved a close below it since Oct. 9 of last year.

If the bulls can sustain the current rebound and push the price above the 20-day EMA, the pair may rise to the downtrend line. The bears are likely to mount a stiff hurdle at this level.

If the price turns down from the downtrend line, the bears will make another attempt to sink the pair below the 50-day SMA. If that happens, the pair may witness increased selling pressure from short-term traders, resulting in a drop to $46,000 and then $43,006.77.

Alternatively, if the bulls can drive the price above the downtrend line, the pair may rise to the all-time high at $61,825.84. A breakout of this resistance will suggest the resumption of the next leg of the uptrend.

Ether (ETH) has been trading below the moving averages for the past three days, signaling weakness. The bulls are attempting a relief rally today but the pullback may face selling by the bears at the 20-day EMA ($1,711).

If the price turns down from the 20-day EMA, the bears will try to sink the ETH/USD pair to $1,500 and then $1,289. The marginally downsloping 20-day EMA and the relative strength index (RSI) just below the midpoint suggest a minor advantage to the bears.

Binance Coin (BNB) slipped below the 20-day EMA ($251) on March 24 and bears continued their selling on March 25, but they could not break the 50-day SMA ($216) support. This attracted buying from the bulls who are currently trying to push the price back above the 20-day EMA.

The flat moving averages and the RSI just above the midpoint suggest a balance between supply and demand. If the bulls can push the price above the downtrend line, the BNB/USD pair could rise to $309.50.

Contrary to this assumption, if the price turns down from the downtrend line, the bears will once again try to break the 50-day SMA support. If they succeed, the pair may drop to the critical support at $189.

Cardano (ADA) repeatedly turned down from the 20-day EMA ($1.14) for the past three days, but the bears could not break the $1.03 support. This suggests accumulation by the bulls at lower levels.

The bulls have pushed the price above the 20-day EMA today. If they can sustain the higher levels, the ADA/USD pair may gradually move up to $1.48. The bears are again likely to pose a stiff challenge at this resistance.

The 20-day EMA is flat and the RSI is just above the midpoint suggesting a possible range-bound action for a few days. This neutral view will invalidate if the price turns down and breaks below $1.03. That could signal the start of a deeper correction to $0.80.

Polkadot (DOT) broke below the symmetrical triangle and the 50-day SMA ($32.55) on March 24, indicating the bears have overpowered the bulls. Usually, after the price breaks below an important level, it tends to retest the level. In this case, the price may rise to the breakdown point, which is close to the 20-day EMA ($34.26).

If the price turns down from this resistance, it will suggest the sentiment has turned negative and traders are selling on rallies. The bears will then try to sink the price below $26.50. If they can pull it off, the DOT/USD pair could extend its decline to the pattern target at $18.22.

This negative view will invalidate if the bulls can push and sustain the price above the 20-day EMA. Such a move will suggest strong buying at lower levels and a possible consolidation for a few days.

XRP dropped below the $0.50 support and the moving averages on March 24. However, the positive thing was that the lower levels attracted strong buying from traders and the price snapped back above the $0.50 level on March 25.

The RSI bounced off the midpoint and the moving averages are sloping up, indicating the sentiment has turned positive and traders view dips as a buying opportunity. If the bulls can drive the price above $0.60, the XRP/USD pair may rally to $0.65 and then $0.78.

On the contrary, if the price again turns down from $0.60, it will indicate a lack of demand at higher levels. That could keep the pair range-bound for a few more days.

On the other hand, if the pair turns down from the 20-day EMA, the bears will once again try to sink the price below the 50-day SMA. If that happens, the pair may drop to $20.74. The 20-day EMA has started to turn down and the RSI is just below the midpoint, suggesting a minor advantage to the bears.

THETA is currently consolidating in a strong uptrend. The bulls purchased the dip to the 38.2% Fibonacci retracement level at $10.31 on March 25. This shows the sentiment remains positive and traders are buying the dips.

If bulls can thrust the price above the $13 to $14.96 zone, the THETA/USD pair could start the next leg of the uptrend that may reach $19. The rising moving averages and the RSI in the overbought zone suggest the path of least resistance is to the upside.

Litecoin (LTC) turned down from the 20-day EMA ($191) on March 24 and broke below the trendline of the symmetrical triangle. This is a negative sign as it suggests that the triangle is acting as a reversal pattern.

The downsloping 20-day EMA and the RSI in the negative zone suggest the bears have the upper hand. If the price again turns down from the 20-day EMA, the bears will try to extend the correction to $152.94 and then to $120.

However, the bulls are unlikely to give up easily. They will try to push the price back above the 20-day EMA. If they succeed, it will show aggressive buying at lower levels and may keep the LTC/USD pair inside the triangle for a few more days.

Chainlink (LINK) plummeted below the minor support at $26.28 on March 24 and reached the important support at $24. Although the bulls have held this support for the past two days, the rebound lacks strength, indicating a lack of confidence among buyers that the correction may be over.

The 20-day EMA ($27.97) has started to turn down and the RSI has dipped into the negative territory, suggesting that bears have the upper hand. A break below $24 could intensify selling that may drag the LINK/USD pair to $20.11.

This negative view will invalidate if the bulls can push the price above the 20-day EMA. Such a move will suggest strong buying at lower levels and could keep the pair range-bound between $24 and $32 for a few days.